Previously, we had to run after incidents and perform very complex analysis to prove the root cause and its effects. Today, it's just a click in eG Enterprise.

DACHSER Group SE & Co. KG is one of the world's leading logistics companies. Founded in 1930 and headquartered in Kempten, Germany, DACHSER has presence in 396 worldwide locations extending global transport and warehouse network to enable seamless supply chains in every corner of the world. Some of the popular and far-reaching logistics networks that DACHSER operates are European Logistics, Food Logistics, Air & Sea Logistics, Rail Services, and Warehousing.

The Challenge: Citrix Migration and EOL of Citrix EdgeSight

To enable state-of-the-art logistics services, DACHSER relies on its IT systems. End-user computing is a key technology used at DACHSER to deliver remote, on-the-go connectivity to their employees. Application and desktop virtualization technologies from Citrix are being used to provide remote connectivity to more than 20,000 end users. The Citrix environment has 1000+ servers with over 800 XenApp servers, 220 Citrix XenServer hypervisors, and multiple PVS servers, Delivery Controllers, and NetScaler appliances.

In early 2017, the version of Citrix XenApp in use at DACHSER, ver 6.5, was on a path to end of life (EOL) and the Citrix administration team were looking to migrate to Citrix Virtual Apps and Desktops 7.15. Until ver 6.5, the Citrix administrators were using Citrix EdgeSight to troubleshoot any Citrix issues that would come up, but Citrix EdgeSight was no longer available in the new 7.15 release. Citrix Director, the built-in monitoring tool in Citrix 7.x did not have the same capabilities as Citrix EdgeSight. Furthermore, to access the full feature set of Citrix Director, DACHSER were required to upgrade to Citrix Platinum (now called Citrix Premium) licensing. From a quick analysis of Citrix Director's capabilities, DACHSER's Citrix team determined that it did not have the end-to-end monitoring capabilities that they needed to have to detect and resolve issues proactively.

The Application Services team at DACHSER were also interested in performance monitoring. They needed to go beyond the Citrix stack and monitor backend applications and infrastructure including HP-UX systems, Oracle and SQL database servers - and Citrix Director did not fit their need. Given the heterogeneous nature of their infrastructure and the number of different stakeholders, having a single correlated view of the entire service delivery chain was a must for DACHSER.

DACHSER considered various monitoring tools but most of these either covered only a portion of the infrastructure or did not go deep enough into the performance of Citrix. DACHSER's Citrix team was introduced to eG Innovations at a tradeshow. A live demonstration of the eG Enterprise suite convinced them to start with a pilot deployment in their infrastructure. "We tested multiple monitoring solutions in parallel to see which one was effective. When created a test to diagnose the root cause of a production issue that we were trying to solve, only eG Enterprise could detect the cause of failure," said Michael Mainusch, Team Leader, Application Services at DACHSER.

Built with the intelligence to automatically understand dependencies between disparate IT components, eG Enterprise automatically correlates performance metrics across the environment and pinpoints the root cause. This coupled with the out-of-the-box thresholds, auto-baselines and a wealth of monitoring templates and reports, convinced the team at DACHSER and made them purchase eG Enterprise for monitoring their large Citrix environment. "We chose eG Enterprise because of its detailed monitoring and reporting capabilities for Citrix," said Mr. Mainusch. 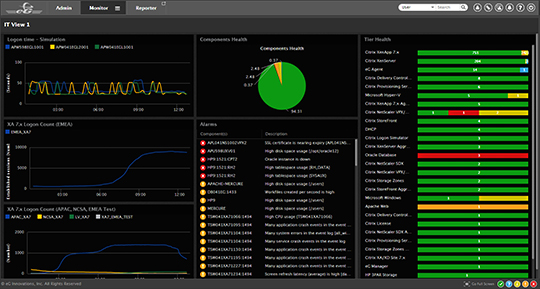 eG Enterprise web console in use at DACHSER

Within a few months of deployment, eG Enterprise became a go-to solution for Citrix monitoring at DACHSER. Their operations team uses eG Enterprise to monitor the health, availability and performance of all applications, desktops, user sessions and the supporting Citrix server-side components, such as XenApp, XenDesktop, XenServer, NetScaler, StoreFront, PVS, and so on.

Deep visibility into the Citrix 7.x stack provided by eG Enterprise allows the team at DACHSER to monitor user experience of virtual application/desktop sessions and identify in real time if there are any issues. The built-in logon simulator is deployed at the main data centers and key remote locations and is helping the team at DACHSER to monitor logon performance proactively.

"When eG Enterprise reported that the committed memory on a server was full, we looked into the Task Manager first, and noticed that we had free memory of 25%. On further analysis, we found that the server had Java processes consuming 22 GB of memory, instead of the configured limit of 10 GB and there was indeed a problem on that server. A few minutes later, we received complaint from a user that he was unable to work. eG Enterprise had proactively found and alerted us to the issue before the user complained and with the details it provided, we were able to resolve the problem quickly," said Mr. Mainusch.

eG Enterprise helped DACHSER optimize their hardware and application setup of 1000+ servers, supporting approximately 200 applications and 20,000 users around the globe and transformed reactive management and support to proactive monitoring and capacity planning.

DACHSER leverages the aggregated metrics capability in eG Enterprise to monitor and report on metrics across different components. Mr. Mainusch said, "With aggregation, it's easy to identify if there is a global problem or for a particular zone of group of servers or users. This helps add more meaning to the alert, helping us troubleshoot problems with ease."

We struggled with performance issues in some applications and haven’t been able to identify the reason in our production environment. Only eG Enterprise pointed out the real failure with the help of its root cause analytics and out-of-the-box thresholds and monitoring templates.