The latest news from eG Innovations

Performance management software vendor eG Innovations has announced the general availability of their eG Enterprise 6.3 offering. The highlight is the availability of the first native performance monitoring capability for Citrix virtualized desktops and applications managed by a cloud service. It includes another enhancements as well, such as new support for Citrix Linux VDAs, and deeper visibility in monitoring for the NVIDIA vGPU. 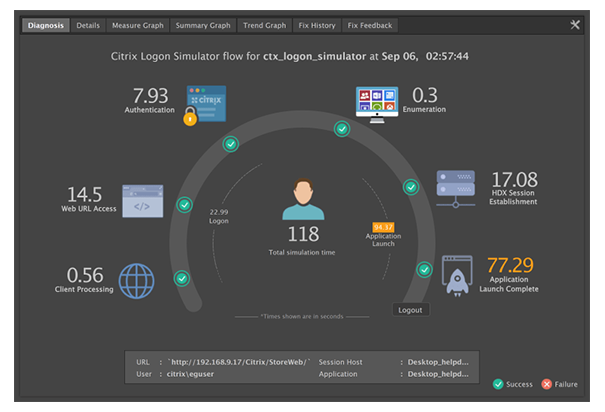 The eG Innovations global offices are in Singapore, with U.S. offices in New Jersey. They are quite global in scope, with about half of their revenues coming from North America, 30 per cent from Europe and 20 per cent from Asia-Pacific.

“We have been profitable and growing for the last 15 years,” said Srinivas Ramanathan. EG Innovations’ President, Founder and Chief Executive Officer. “We provide software solutions that help customers maintain and manage their IT environment.”

Ramanathan said that while IT  monitoring once focused on CPU memory and disks, it has shifted to be mainly around user experience today.

“There has been a move to looking at IT from a user perspective, and once you understand that, the issue becomes how can you improve it,” he stated. “That’s not an easy problem to solve. We help IT administrators determine where the problems are in their environment, and help them deliver better service to their customers. That data that we collect also lets customers right-size and optimize and intelligently plan capacity, rather than have to throw hardware at the problem.”

Citrix monitoring is only one component of the company’s business, as they also do other types of application performance monitoring, enterprise application monitoring and unified monitoring. Citrix VDI monitoring is the most significant component however. Ramanathan said that it accounts for half of EG Innovations’ revenues.

“Performance monitoring has tended to be focused around traditional applications, and Citrix and VDI have been underserved,” Ramanathan said. “The technology has moved faster than the monitoring tools, and many of the larger vendors like IBM don’t have a strong monitoring tool focus of their own. They rely on Citrix themselves, and Citrix really hasn’t done enough. That’s why this area been a hotbed for us and the several other specialized companies in the space. We are the only monitoring tool vendor though that is recognized as a Global Partner of Citrix.”

Ramanathan said that VDI performance management is even more challenging than monitoring web applications, because if there’s a glitch with the VDI, it wont work at all. In addition to Citrix, eG Innovations Enterprise also supports competing technologies like VMware Horizon and Microsoft RDS. However, it’s of most interest to Citrix resellers, he indicated.

“This is even more the case now because of the end-of-lifing of Citrix 6.5,” Ramanathan said. “Version 7 significantly changed the architecture, which left many customers fearful of the upgrade. The new versions of Citrix also don’t have good built-in monitoring capabilities.”

The ability to natively monitor performance of key elements of the Citrix Cloud control plane, the Cloud Connectors and the Citrix resource plane has only recently been made possible.

“Until a few months ago, there was no visibility into what Citrix is doing in the cloud, because only recently have they exposed their APIs,” Ramanathan said. “They also give the impression that the Citrix Cloud doesn’t require monitoring. However, it has multiple domains of control, with individual enterprises, Citrix and  Microsoft all operating some of them. If you operate a service, you have to figure out whose problem it is. So monitoring isn’t simple at all. We now provide visibility into this.”

“We keep track of new enhancements in Citrix family,” Ramanathan said. “They recently introduced a new protocol for Citrix HDX adaptive transport, and we can track the progress of this latest enhancement.

“We only supported Windows here in the past,” Ramanathan said.

“In the past we could tell what virtual machines were taking a lot of GPU, but not which specific applications were taking it,” Ramanathan indicated. “Now we go one level further. That is cutting edge, and comes because we have worked closely with NVIDIA on this.”

“We are starting to see customers looking at other cloud options for virtual desktops, such as Virtual AWS Workspaces,” Ramanathan said. “We can now provide similar visibility for these environments, to help anyone deploying workspaces in the cloud. It lets admins manage the user experience and deliver the kind of reports they need.

“Last year, we introduced the ability to go deep into the Java stack,” Ramanathan said. “With this release, also support this for .NET, to provide that same core level visibility.

eG Innovations sells through a hybrid model, but most of their business goes through channel partners.

“We sell direct where required, but most often work through channel partners – resellers, distributors and MSPs,” Ramanathan said. “In Canada, we work entirely though reseller and service provider partners.”

All trademarks, service marks and company names are the property of their respective owners.