This is a re-post of “Citrix XenApp Edgesight Implementation in 7.5” by Rob Beekmans from his excellent blog vThoughts of IT:

In this blog I will talk about the improvements made to Citrix XenApp 7.5 and specifically to Director for that’s where all the XenApp administrators have to go to to manage the users.

Citrix Director instead of Edgesight

Let’s start by pointing out that since Citrix XenDesktop 7 Edgesight no longer is a separate product, it’s integrated in XenDesktop and now Citrix XenApp. It’s not really integrated, it’s more like a complete rebuild of the product. Just this week I was visiting a customer with Citrix to help them with an Edgesight 5.4 environment and we were surprised by the old console, felt nice but still so 90s to work in it again.

With XenDesktop 7 the rebirth of Edgesight has brought us a few nice features but many still are lost. Edgesight has an awful lot of data that you could use to troubleshoot. The current version of Edgesight in 7.5 has only a fraction of that.

When 7.x came out we had a few nice twitter conversations with Citrix to point out what we were missing. With the release of 7.5 I expected a few more additions but haven’t found them yet. I will show what of Edgesight is integrated or reborn and then you can decide for yourself.

I think it’s fair to say that the screenshots in this blog represent the complete Edgesight implementation. When we take a look at the dashboard you would see when you log on you notice that you see the sessions connected and the average logon duration.

The sessions connected is an interesting one, I think I wrote about it before but I’m not sure so let’s get into that one for a moment.

When you click on the number of the sessions connected you are taken to another screen where you will see all session with details, some details. This is the equivalent of the management console you had with XenApp. So an administrator who manages a 1000 concurrent user farm, sorry site, will have this screen open en see the session listed. If however the unlikely event would happen that a session had issues you only could log off this session or disconnect it (now why would you do that).

From this console you can’t do shadow or kill a process or anything you would like to do. This console is there for the overview for them that want overview. My advice is, don’t use it… you only need it when you want to search for sessions etc with the filter. I hoped that they would add the shadow option here that would been very useful to this screen.

When you need to support your users you will stay in the dashboard screen and search for them, like you see in the screen at the top. How you will manage users from there is written here.

Another screen that is of interest is found from the dashboard under trending. There are a number of options that are useful from a management perspective. One of the most useful screens there is the load evaluator option where you can see if you set that up right.

The other options are connection failures, failed server, failed desktops, logon performance and network. Logon performance is pretty nice but I rather see this from a user perspective, but nice nevertheless. 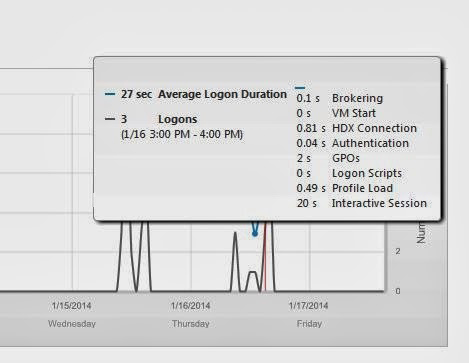 The most wanted report in Edgesight was the session duration details report where you could see the client and server side of the session and the time all actions took.

With the report shown in the screenshot above and the details at the user level they’ve done a good job. I was afraid this one would be put in Platinum like they do with all nice features (reverse seamless) but thank goodness it’s in all edition available.

This screen is a good starting point for troubleshooting when users call for slow logons. Profile load should never be higher then 2-3 seconds, anything higher is a roaming profile.

And that’t is.. there are no more Edgesight features in XenDesktop or XenApp 7.5

..ah wait there is one more but somehow it’s never working and I can’t seem to find any info on it either.

this option is there on a global level and per user but I guess I will need Netscaler HDX insight running to get any data here… would be nice if they add a line that says “you ain’t got no Netscaler son” but it says open the help, which opens a 404.

Edgesight is reborn but still a toddler compared to his successor. The features that are included are nice but management in general compared to what XenApp administrators were used to are minimal. Hopefully in the next versions this will be taken care off.

For now for real monitoring of your environment I would suggest to take a look at eG Innovations and use Edgesight only for troubleshooting.