Good Marketing Does Not Age!

Just back from the Citrix Sales Kickoff meeting in Orlando. eG Innovations was one of 15 vendors invited to exhibit at the event. We had a great turn out at the booth. The big take away from the event for us was that the “Its Not Citrix” marketing campaign we came up with in 2004 still resonates with the audience! Amazing to see how the guy with the bruised face doesnt seem to have aged in the last seven years! 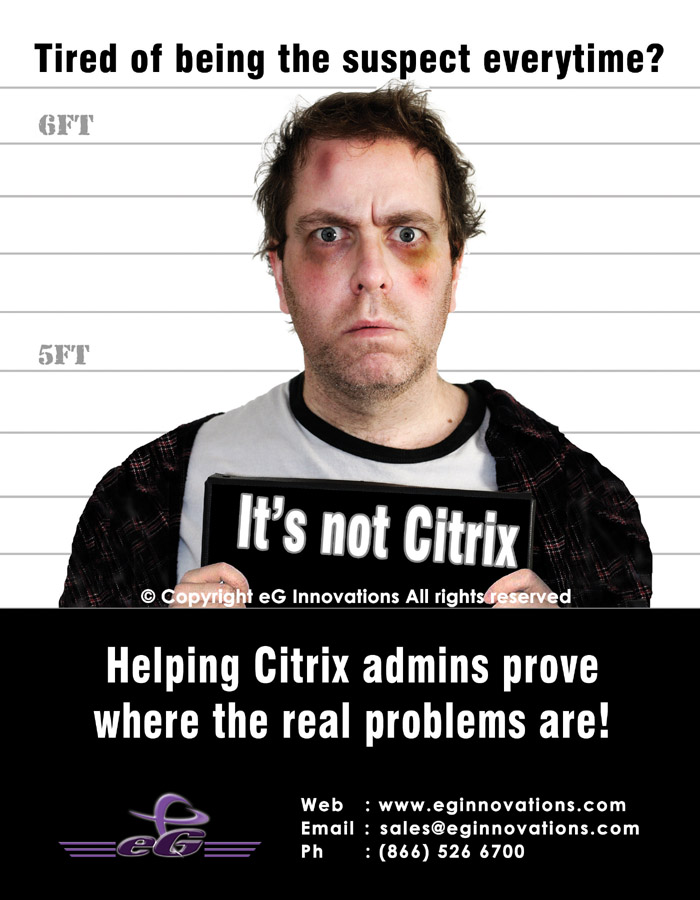 Of late, we have been seeing a big increase in number of enquiries for Citrix XenApp and XenDesktop monitoring solutions. eG’s relationship with Citrix has a long history. In 2003, we first came out with support for what was then called Citrix Presentation Server. We had so many people asking for support for Citrix that we had to figure out what the market need was. Very early on in that process, we realized that the real pain for Citrix admins is not that they need a whole lot more visibility into the Citrix XenApp (Presentation) server itself but what they really need is end-to-end monitoring. Since users often call the help desk saying that “Citrix is slow” or that “Citrix is not working”, the Citrix admins often get blamed for problems – even the ones that are because of network slowdowns or application issues. It is these problems that the Citrix admins find very difficult to identify and resolve.

Effectively, the Citrix admin is a “business service manager” and not a “silo” manager and what he/she needs is a tool that can analyze the performance of every tier of the infrastructure, correlate across tiers, and help the Citrix admins prove where the real problems are. This is exactly where eG’s Citrix monitoring solution excels.

There were several other smaller players (Premitech, Reflectent, XTS, to name a few) that followed in our footsteps and started looking at this market in 2004-2006, although none of these products provided the business service monitoring capabilities we did for Citrix infrastructures. Citrix’s acquisition of Reflectent and its EdgeSight product in mid 2006 changed the landscape in this space and most of the other players did not survive this change.

Interestingly, over the last year, the market dynamics in this space have changed. Most Citrix customers already own and use EdgeSight for in-depth views into their Citrix XenApp servers. Yet many have come to us looking for a more comprehensive, end-to-end view for monitoring their Citrix-based business services. What they are looking for is not to just prove “Its Not Citrix” but to have the additional level of visibility into the network, the virtualization platform, the applications, and the storage, and to be able to correlate between these tiers to pinpoint where the problem areas are. The business critical nature of Citrix-based services and the obvious need for a simpler to use, more comprehensive monitoring solution make the Citrix marketplace a very lucrative one for us!

Hundreds of enterprises use eG Enterprise to monitor their Citrix infrastructures. Check out our success stories here >>>