What is Garbage Collection in Java and Why is it Important?

For many, the world of Java is shrouded in mystery and endeavor. One such endeavor is garbage collection. There is many a viewpoint on garbage collection – whether it is good or bad, when is it needed, how often should it run, how to tune garbage collection operation, how to know when it is not operating as expected, and so on. In this educational post, we will try to clear the air on Java garbage collection and make it easy for developers and administrators to deal with it.

What is Java Garbage Collection?

Java applications obtain objects in memory as needed. It is the task of garbage collection (GC) in the Java virtual machine (JVM) to automatically determine what memory is no longer being used by a Java application and to recycle this memory for other uses. Because memory is automatically reclaimed in the JVM, Java application developers are not burdened with having to explicitly free memory objects that are not being used. The GC operation is based on the premise that most objects used in the Java code are short-lived and can be reclaimed shortly after their creation. Because unreferenced objects are automatically removed from the heap memory, GC makes Java memory-efficient.

Garbage collection frees the programmer from manually dealing with memory deallocation. As a result, certain categories of application program bugs are eliminated or substantially reduced by GC:

There are two types of garbage collection activity that usually happens in Java:

To free up memory, the JVM must stop the application from running for at least a short time and execute GC. This process is called “stop-the-world.” This means all the threads, except for the GC threads, will stop executing until the GC threads are executed and objects are freed up by the garbage collector.

Modern GC implementations try to minimize blocking “stop-the-world” stalls by doing as much work as possible on the background (i.e. using a separate thread), for example marking unreachable garbage instances while the application process continues to run.

The traditional Oracle HotSpot JVM has four ways of performing the GC activity:

Many JVMs, such as Oracle HotSpot, JRockit, OpenJDK, IBM J9, and SAP JVM, use stop-the-world GC techniques. Modern JVMs like Azul Zing use Continuously Concurrent Compacting Collector (C4), which eliminates the stop-the-world GC pauses that limit scalability in the case of conventional JVMs.

Why is Monitoring Garbage Collection Important?

Garbage collection can impact the performance of Java application in unpredictable ways. When there is frequent GC activity, it adds a lot of CPU load and slows down application processing. In turn, this leads to slow execution of business transaction and ultimate affects the user experience of end users accessing the Java application.

For optimal Java application performance, it is critical to monitor a JVM’s GC activity. For good performance, full GCs should be few and far between. The time spent on GC should be low – typically less than 5% and the percentage of CPU spent for garbage collection should be very less (this allows application threads to use almost all the available CPU resources).

What Are the Key Garbage Collection Metrics to Monitor?

This allows you to identify when garbage collection is taking too long and impacting performance, which will help you to determine the optimal settings for each application based on historical patterns and trends. 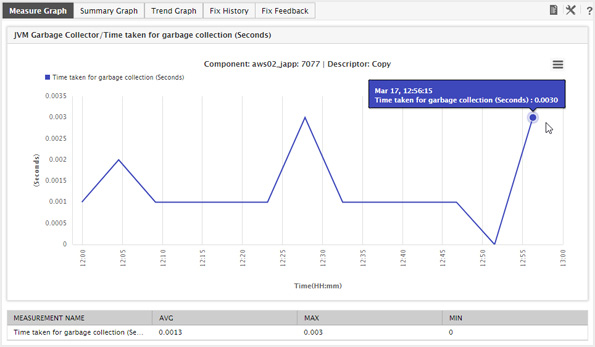 Now that we have fair understanding of Java garbage collection, let’s summarize by answering some of the questions we started the blog with: