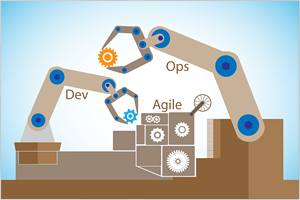 There are quite literally hundreds of tools available for DevOps and you could probably run out of pixels if you tried to list them all in one place. We have put together this top 10 DevOps tools list based on our own DevOps experience with all of these tools.

Over the years DevOps has become quite the buzzword. Although DevOps has been challenging to describe because of its abstract nature, it’s described mainly as a culture change, where Dev and Ops teams collaborate to establish a more agile and reliable framework that counts on trust, transparency, and seamless communication to improve productivity and speed of software development from code commit to deploy.

Adoption of new techniques, better tools, and improved collaboration methods continue to be on the rise in the DevOps universe. Enterprises today are looking for automation in the area of continuous integration, continuous testing, and continuous delivery to facilitate their DevOps adoption.

How to Ensure Peak Performance of Applications in Production »

A typical DevOps process consists of 8 stages: plan, code, build, test, release, deploy, operate and monitor. There is a plethora of tools available — open source and OEM solutions — that can be used for each of these stages and some across various stages. There’s no single magical tool to implement or facilitate DevOps. As organizations embark on their DevOps journey, they will have to research, evaluate and try various tools for various functionalities. To make it simple for DevOps teams, we have put together a list of 10 DevOps tools that can be used to achieve a successful DevOps transformation.

Read on to see our pick of 10 tools. We hope you benefit from them in your DevOps journey.

Monitoring is a critical part of software development and deployment. Through all the stages of DevOps, from code build to test and commit to deploy DevOps teams need to understand the impact that their code will have on pre-production and production environments. eG Enterprise is a continuous monitoring tool allows tracking application performance in the context of code changes to understand how they impact performance. If there are slow transactions, eG Enterprise uses distributed transaction tracing to highlight if that’s due to a certain line of code that’s executing slowly, or due to slow third-party calls, or because of slow database queries.

Integrating continuous monitoring with continuous integration and continuous delivery is critical to identifying bugs early in the development lifecycle. eG Enterprise provides a converged visibility of applications and their supporting IT infrastructure (across containers and microservices environments) allowing Dev, Ops and DevOps teams to easily highlight the impact of releases before production rollout. In production environments, eG Enterprise alerts application teams of user experience issues in real time. Synthetic monitoring can be employed for proactive incident tracking before end-user impact.

Git is a widely used DevOps tool across the software industry. It’s a distributed SCM (source code management) tool known for its free open source collaboration and planning that is extensively used for tracking the progress of development work by remote teams and open source contributors. It supports most of the version control features including check-in, commits, branches, merging, labels, push and pull to/from GitHub, etc.

Git is very easy to use and maintain version control artifacts. To integrate Git with the existing workflow, you must host repositories using services like GitHub and Bitbucket, from where team members can push their work. GitHub is more popular, but Bitbucket renders free unlimited private repos for small teams (up to five). Whereas with GitHub, you get access to public repos for free which is an excellent solution for most of the projects. Both GitHub and Bitbucket have seamless integrations. For instance, if you integrate it with Slack, your team members get notified whenever there appears a new commit.

Why Should Developers Use Git?

Gradle is an open source build-automation software that is used to automate building, testing, deployment of application code. Using build.gradle scripts you can automate the tasks — say for example copy files from one directory to another before the build even happens. Gradle is developed based on the principles of Apache Ant and Apache Maven work. Instead of using XML (as used by Maven), Gradle uses a Groovy-based domain-specific language (DSL).

Gradle runs on the JVM and you must have a Java Development Kit (JDK) installed to use it. Many major IDEs — Android Studio, IntelliJ IDEA, Eclipse, and NetBeans — allow the import of Gradle builds and interacting with them.

Selenium is a free, open source portable automated testing framework. It can be made to automate test case execution for web applications. Scripts are developed to automatically test web applications for various conditions. Selenium is very flexible and extensible. It can be used across multiple operating systems, browsers and programming languages. One of the major highlights of Selenium is that it supports parallel test execution, which is a very nifty feature for DevOps teams.

Functionality of Selenium can be expanded by integrating it with third-party solutions such as:

Selenium requires less hardware when compared to other test automations tools in the market such as UFT, QTP, SilkTest, etc. The only flipside of Selenium is that it requires some level of coding to build the scripts. With a highlight engaged and involved on community, Selenium gets a lot of support from fellow testers around the world. Synthetic monitoring tools also include Selenium-based solutions for functional and performance monitoring of applications in production.

Jenkins is an open source solution for continuous integration that orchestrates and automates sequence of actions enabling developers to reliably build, test, and deploy their software. With over 300,000 installations around the world and over a million users, Jenkins is used by DevOps teams for accelerating production rollouts by benefitting from its power of automation. With a large pool of plug-ins available in the Jenkins ecosystem, its capabilities can be expanded to various stages in the DevOps lifecycle.

Jenkins is entirely free and available at no cost. Because it is written in Java, it is portable across all major platforms. It is typically run as a standalone application in its own process with a built-in Java servlet container/ application server (Jetty).

Main benefit of using Jenkins: Instead of waiting for a nightly build, every commit made by developers in the source code repository is automatically pulled to build by Jenkins’ CI server. If there’s any bug in the build, developers need to only check the corresponding commit and fix the issue. This significantly reduces the time required to release new software.

Puppet is an open source configuration management tool to automate inspecting, delivering and managing the software across the complete development lifecycle with platform independence. It automates infrastructure management to deliver software quickly and securely. Puppet is used by 42% of businesses that use DevOps according to a RightScale DevOps survey.

Puppet is written in Ruby and has its own domain-specific language. Puppet has two layers:

The main benefit of Puppet is that it eliminates the need for system administrators to use manual scripting for configuration changes. It helps reduce the cost and effort when one has to change minor code in hundreds of systems, while maintaining a clear and auditable change control mechanism.

Chef has API support from Azure, Rackspace, AWS, which makes it simple to extend configuration management to cloud platforms.

Docker is a forerunner in containerization. It automates application deployment and provides integrated security along with agile operations for legacy and cloud-native applications.

The USP of Docker is that it can package dependencies. It uses a container to package up an application with all the elements and dependencies before sending the entire container as an individual package. In addition to this, Docker promotes an automated, reliable supply chain for lessening time to value. It helps the existing as well as new applications and runs well with AWS and Google Cloud. Distributed development is made simple with Docker.

The most significant advantage of Docker is that it efficiently separates apps into containers to make them more secure and transferable. Docker helps in stimulating massive changes in delivery workflows. If you require a tool to simplify the complicated process of cloud migration, Docker is for you.

Docker’s primary application in DevOps: It ensures the same development environment is made available across all stages of the DevOps cycle from dev to staging to production. Developers can create Docker images and run them in the dev environment. DevOps and IT Ops can use the same images to create test and deploy environments in staging and production.

Kubernetes is the most popular open source container orchestration platform. It automates the deployment, management, scaling, networking, and availability of container-based applications. Think of Kubernetes to Docker as what vCenter is to ESXi hosts. Using Kubernetes, Docker containers can be easily created automatically and assigned to business service on demand and also be scaled down after use.

Deployment automation is the biggest benefit of Kubernetes in the DevOps world. By automating container creation on nodes across on-premises, cloud and hybrid IT environments, Kubernetes can be used to spin up development environment on demand based on business need. This is especially helpful in auto-scaling, rolling updates, canary deployments.

Ansible is an open-source software provisioning, configuration management, and application-deployment tool. Ansible works agentlessly, connecting via SSH or remote PowerShell to execute its tasks. It requires playbooks (YAML files) to be created which incorporate configurations, deployment, and orchestration rules and then executed on Ansible-managed nodes. Repetitive administrations tasks can be automated using Ansible towards improving the scalability, consistency, and reliability of the application deployment environment.

Ansible Tower is a web service and a hub for automation tasks which makes Ansible more easily operable for IT teams. Semaphore, written in Go, is an open source alternative to Ansible Tower.

How Ansible Helps Dev and Ops

What Tools to Use? Let Your Requirement Drive Tool Selection.

The tools discussed above are just a small subset of DevOps tools available in the market. Many of these tools are open source and not expensive. Evaluate your need, analyze the tools available, test them in your environment and choose what works best. At the end of the day, achieving success with your DevOps strategy is not about selecting the right tools alone. Putting in place the processes you need to automate, optimize and accelerate application rollouts is equally important.

I hope this blog was helpful to you in getting a glimpse at some of the most popular tools used by DevOps teams.