6 Surprising things you can learn from our APM survey 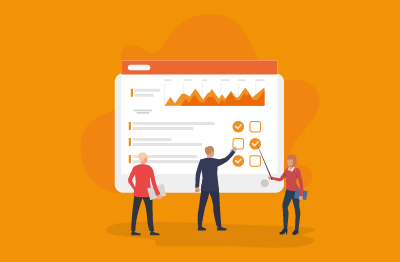 In the summer of 2021, eG Innovations joined forces with the DevOps Institute to run an APM survey to find out how the industry would look in the new normal.

The 2021 APM survey was conducted over three months between July and September. Over 900 people from DevOps, SREs, and ITOps backgrounds participated and we got a broad spectrum of responses.

To dissect the results of our APM in the New Normal Survey 2021 and find some interesting takeaways, I brought in two people to give their diverse views and opinions on the APM industry.

Arun Aravamudhan is the Head of APM, Cloud, and Containers at eG Innovations and has been developing our APM product capabilities according to market demands and customer requirements.

On the other side of the fence, we had Eveline Oehrlich, Chief Research Officer at the DevOps Institute and ex-Forrester analyst. She speaks to vendors and customers alike to understand their needs and has become a voice in the community for DevOps.

Want to see the results? Download the full report now. 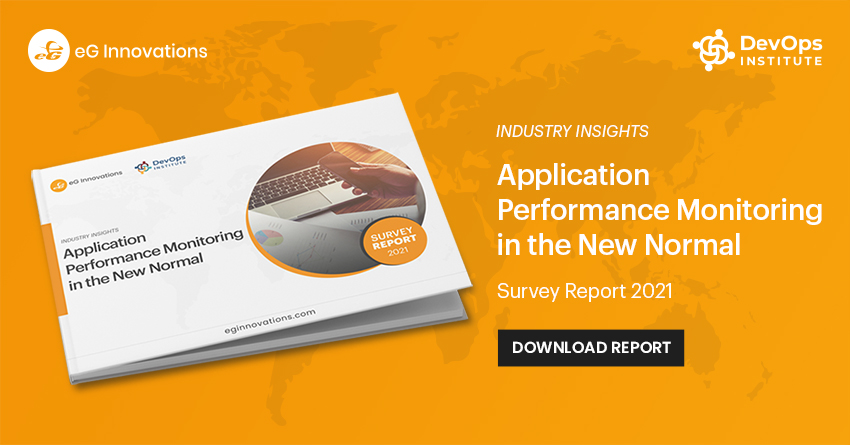 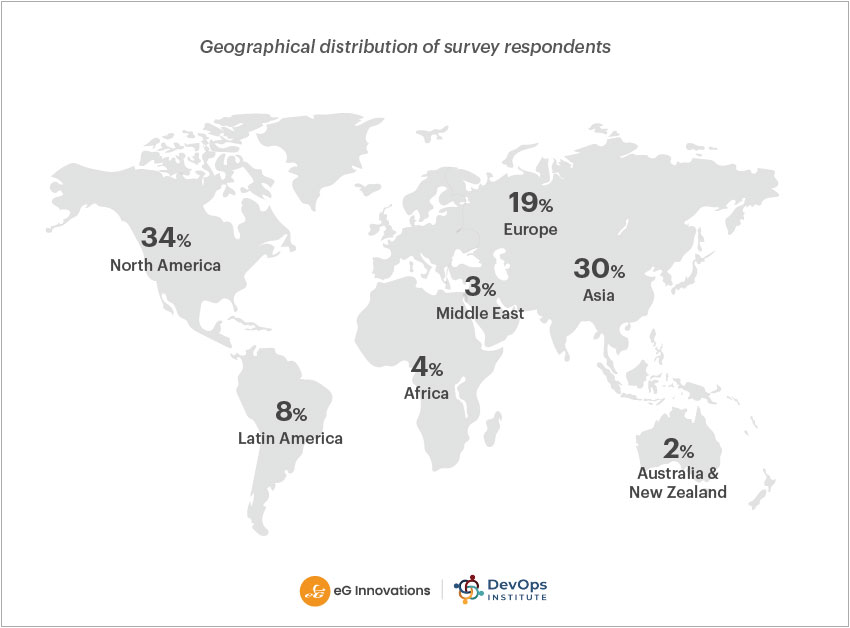 So, what did the results from the survey tell us about the state of APM in the next normal? Well, quite a lot, actually.

1. APM tool users care less about capabilities – and more about getting their problem solved 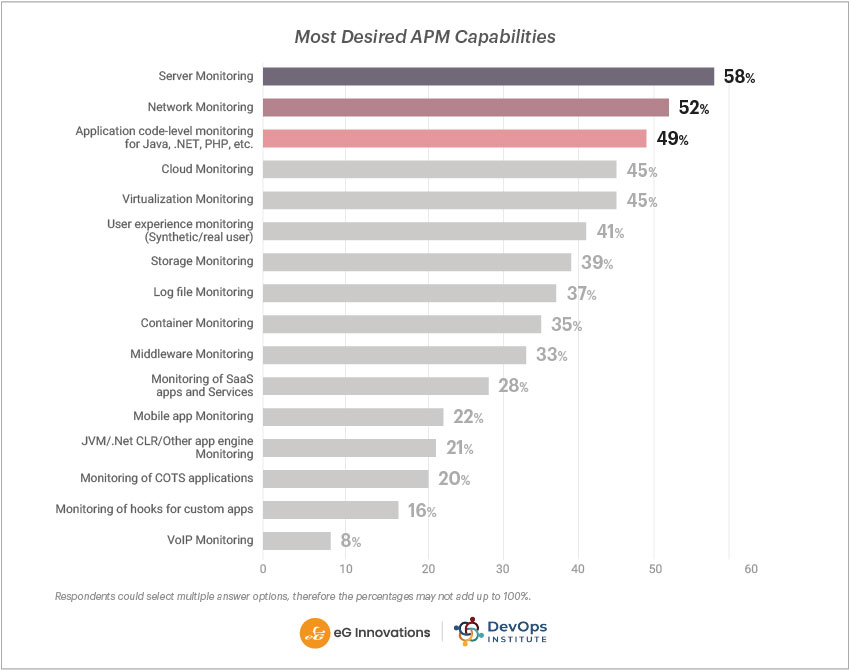 We were expecting code-level application monitoring to be the most popular choice; this was an APM survey after all. However, as Arun pointed out, “All an ITOps, CloudOps, or SRE person cares about is why the application is slow.” The first port of call is to see whether it’s the server the application is running on.

It also reinforces the idea that although analysts and vendors like to make a distinction between infrastructure and application monitoring tools, customers don’t think this way: they just want their problem solved.

Arun finished our conversation about this section by saying that “Basically, everything is important for IT teams. They are on the hook to solve slow applications and they don’t have the time to consider whether to use one tool or another.”

Eveline also added that “From an ITOps perspective, models need to shift towards proactive, predictive performance management.” A predictive capability of an APM tool was conspicuously missing from this chart, suggesting that the market is still very much in firefighting mode when there are problems.

2. Kubernetes could become legacy tech as organizations jump ahead to serverless computing 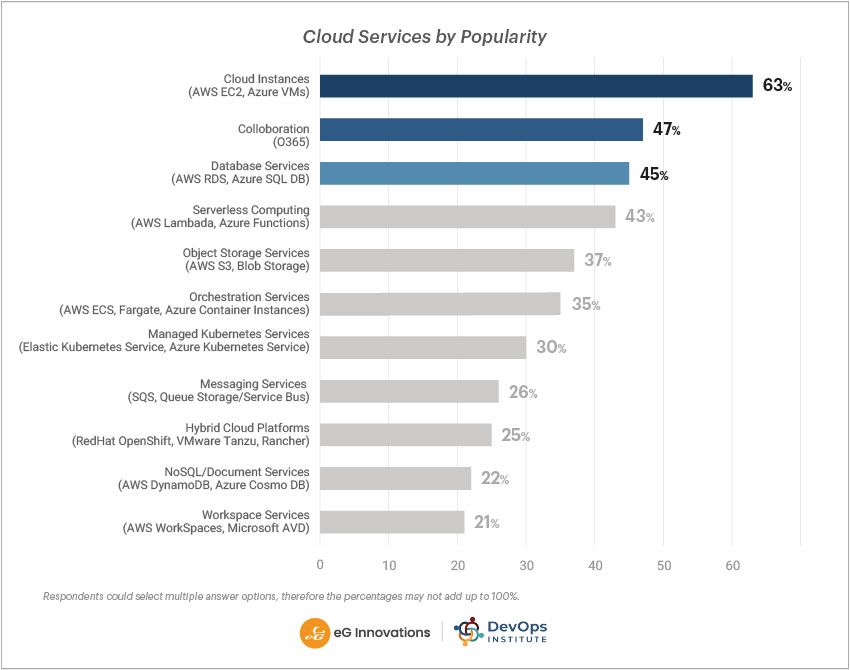 The first three results in this chart are not much of a surprise. As Arun points out, most organizations are going for a “lift-and-shift” cloud migration as you get high levels of scalability, quick spin up times, and cost savings.

Collaboration tools are of course popular, and even more so in the last two years – many tools are perhaps unrecognizable from where they were this time two years ago.

However, why would serverless be more popular than containers? It’s surprising because Arun believes that “Logically, as you go further in your cloud journey and look beyond EC2 or Azure VMs, you start to look for consistent operations, increased portability, and elasticity. You should be looking at containers.”

So, what could be happening? Arun suggests that potentially customers have done their “lift-and shift” from on-premises to cloud and are now looking at re-architecting their applications and don’t want to have containers as a stepping stone.

The key takeaway, according to Arun, is not that one service is more popular than others, but that “Our customers are on a journey and APM vendors like eG Innovations need to support customers on that journey.”

3. More than 4 in 10 respondents said that management team finally recognized the importance of APM tools during the pandemic 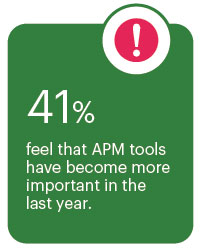 As a company that has been talking about end-user experience before analysts came up with a buzzword for it, it was surprising and a little bit disheartening to see that as many as 41% of organizations said that APM became more important.

We’d have hoped we’d be at a point now where organizations gave end-user experience more importance and it didn’t take a pandemic to make it so.

However, as Eveline pointed out, “Monitoring tools is not something that executives on the business side of the organization are thinking about. What they really care about are the outcomes that these tools can provide.” In this sense, now that the executives are spending more time at home using the applications provided by the business, they are seeing first-hand how many difficulties they and their team are having from slow applications.

As Eveline noted, APM vendors need to make sure that IT monitoring tools need to be complimented with details on impact and outcome on customers and employees for management teams to care about them.

Arun also agreed with Eveline on this point, adding, “When productivity is impacted, management will take a very keen interest on IT performance.”

4. 6 out of 10 respondents demand an all-in-one converged APM tool for their IT applications and infrastucture 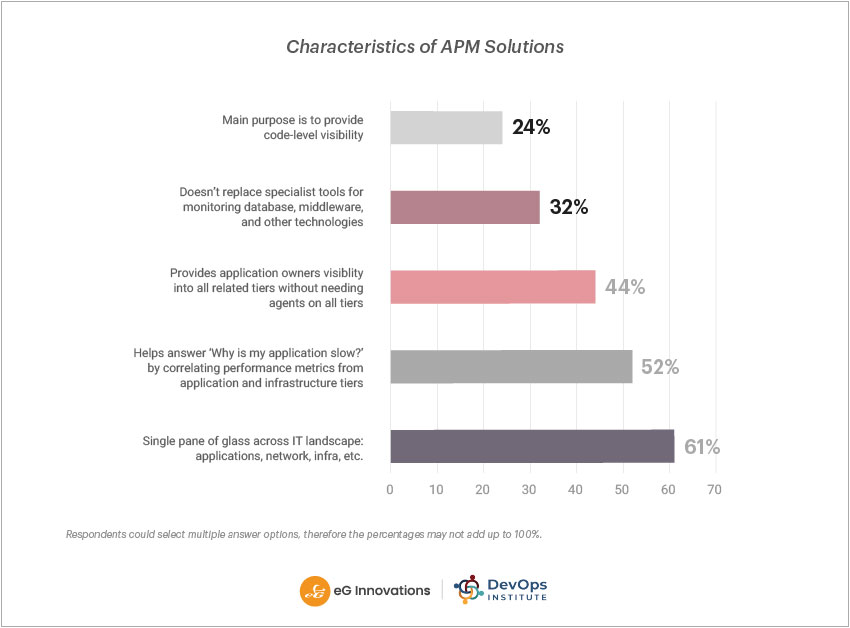 The promise of a single pane of glass to monitor your entire IT deployment has been around for almost as long as monitoring tools have been around. So, why is it the most important feature according to our survey results?

As Arun points out, this is probably linked back to what he was saying earlier. ITOps don’t care how the tool is marketed and sold, they just want a solution that will help them get to the bottom of a bottleneck, slowdown or outage – and to do so as quickly as possible.

When there’s a fire burning in the IT deployment, all that matters is that it’s located as swiftly as possible, and the fewer consoles that you have to window into, the better.

In some ways you can think of it like a needle in the haystack problem. An end-to-end solution like eG Enterprise can tell you which haystack the needle is hiding in, and will do a good job of identifying where in the haystack it is. A specialized tool, say a database monitoring tool, only becomes valuable when you’ve identified that it’s the database that’s the root cause of the problem, and not a symptom rippling out from it.

The problem with having more and more specialized tools, as Eveline mentioned, is that it leads to a stalemate between the siloes. “People will say it’s not my problem because their specialized tool can’t see the problem. Reducing the number of tools and getting a look at the larger picture actually helps ITOps teams with their troubleshooting, leading to fewer war rooms and finger-pointing.”

5. Only 1 in 10 respondents are equipped with the right APM tools to deal with performance slowdowns and outages 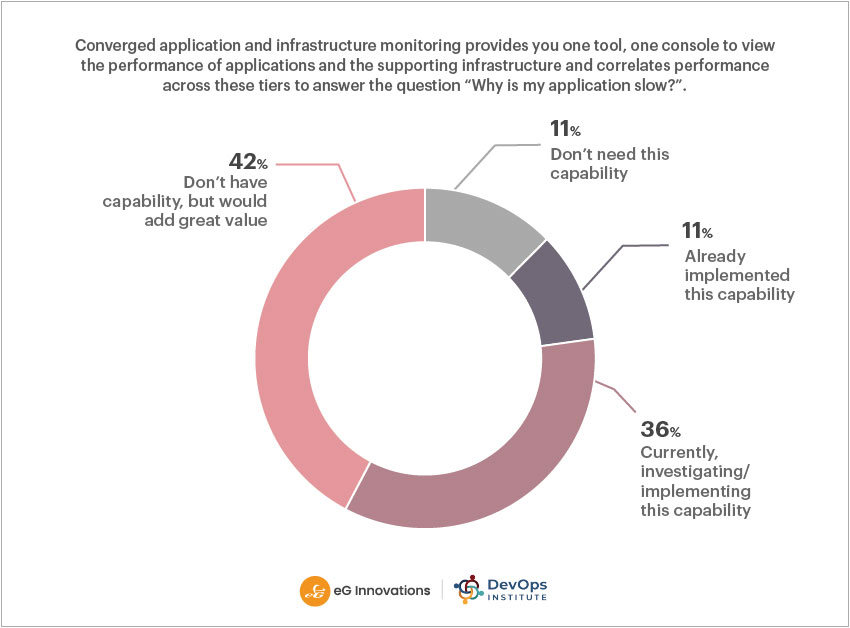 Despite a minority of people saying they had this converged IT monitoring solution, 78% said that it is a critical need. So, why aren’t more organizations adopting it?

Eveline had some thoughts on this which boiled down to people understand the need for it, but few are willing to give up the depth they might have right now. Additionally, she goes on to say that she believes “Functional or technical silos are coming to an end from a monitoring perspective, but we are also seeing new silos being created, namely the cloud or containers. These challenges will continue in new technologies and maybe different silos.”

This is the greater worry, that as technology evolves, monitoring continues in siloes rather than changing the fundamental philosophy and approach to ITOps where teams are measured and led differently. Eveline finished up by saying that “This shift from the old siloed way of monitoring to converged monitoring is only going to happen with the adoption of DevOps and similar philosophies.”

6. Tool sprawl could be hindering IT teams’ ability to find the root-cause of problems and could be contributing to unnecessary war room scenarios 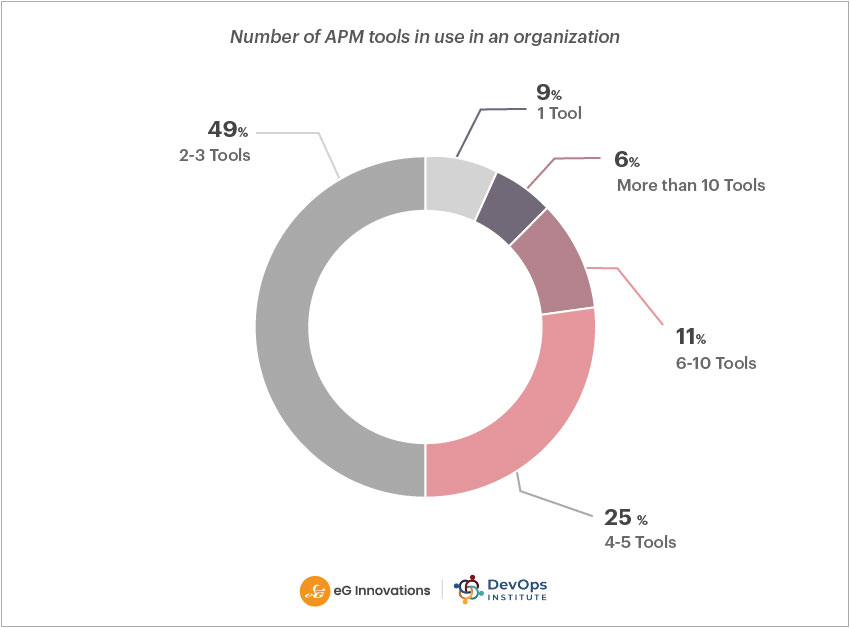 As we’ve seen, IT teams do recognize the need for a converged solution to reduce tool sprawl, so why do companies spend so much money on purchasing new monitoring tools with overlapping capabilities?

According to Eveline, “Everyone has their own favorite monitoring tool and a belief that it is superior to everyone else’s. Each silo will claim that they can’t do their job effectively without their favorite tool and organizations end up in a situation where you can’t see the forest for the trees – there’s too much granular data.” However, Eveline goes on to add that “The demand from the customers and employees and the current workload within these teams is slowly forcing these teams to focus and tool sprawl cannot continue.”

These six stats were just a handful of the many insights and nuggets of information in the full report. Discover more such insights, such as:

Download the 2021 APM in the New Normal survey now » 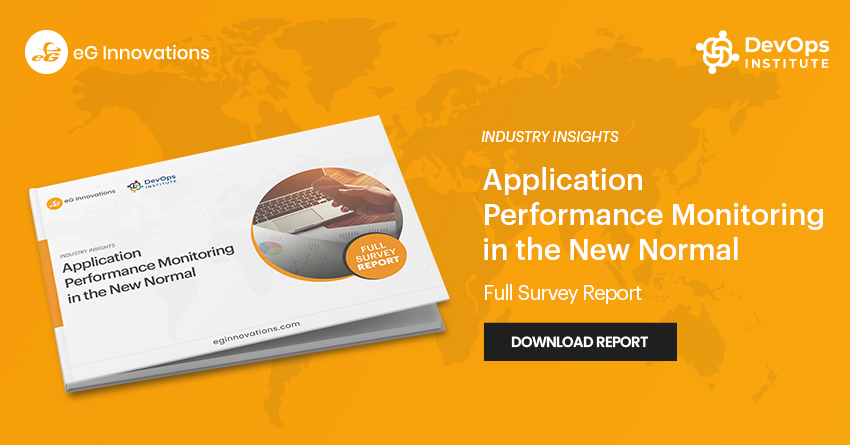 Embedded Analytics for IT