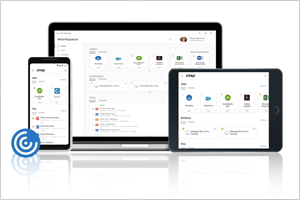 Using Citrix StoreFront in conjunction with Receiver, organizations can provide users with self-service access to their applications and desktops – all with a common user interface, regardless of the endpoint device hardware, OS or form factor.

Citrix Receiver allows users to connect virtualized applications and desktops from their digital endpoints. Receiver works with the HDX protocol built on top of the ICA protocol.

Why is it Important to Keep Citrix Receiver Updated?

Citrix Receiver is a must-have software on client devices so they can connect to Citrix sessions. Therefore, the Citrix administration team must ensure that the endpoint devices Citrix end users are using have Receiver installed.

At the same time, since an organization can have thousands of endpoints, it is essential that there is uniformity in Citrix Receiver installation across these endpoints. Organizations must seek to keep the Citrix Receiver versions updated for several reasons:

Also, each Citrix Receiver version comes with a strict ‘shelf-life.’ Once a version reaches its prescribed end-of-life (EOL), Citrix will no longer provide technical assistance to troubleshoot issues related to that version. Until the end-users upgrade the Receiver, your support calls will grow longer, service levels will suffer, and the Citrix user experience will remain below par.

“Keeping your employees’ Citrix Receiver up-to-date is critical for ensuring that every user of your XenApp and XenDesktop Sites is getting the best possible app and desktop performance, end-user experience, and security benefits.”

With Citrix releasing at least a couple of updates to the Receiver on various platforms, the challenge with this is twofold, especially in large BYOD environments with hundreds or thousands of end users:

For mobile device users, they must get the updated app from their respective app store (based on which mobile operating system they are using). Citrix StoreFront is also built with the capability to check the Receiver version and notify users that an update is required. Both these require the user to be aware of the version they are using, then alerting the Citrix admin to get updated. This is a lot of work.

From an administrator’s perspective, they can use Active Directory Group Policy scripts to push Receiver updates to the user devices as part of the startup/shutdown of AD GPO. Or, can use any third-party patch management tools to push out the updated software to all devices.

In order to relieve the user from the burden of tracking what version of Receiver they have and make the administrator’s job easy to only update those devices that have older versions of Receiver, it is imperative to centrally manage and track which devices are running which version of Receiver.

Analytics and Insights into ‘Citrix Receiver Version in Use’ Can Help

To assure Citrix users of the best performance, security, and experience at all times, Citrix administrators should be able to quickly identify the client devices that are installed with an obsolete/problematic Citrix Receiver version and the users who will be impacted by this.

Having the Citrix Receiver version data at hand is also useful for troubleshooting. When a user complains of an issue during Citrix connectivity, it is very possible that they are using an old version of Receiver. Without the information on Receiver version, the Citrix admin can spend hours trying to figure out the problem on the server side. If the Receiver version is known, it can be easily updated to sort out the issue for the end user.

This is where eG Enterprise helps! Without requiring you to deploy any agents on all your client devices, eG Enterprise looks across your Citrix Site and automatically discovers the following:

Then, eG Enterprise intelligently encapsulates this information in a comprehensive Citrix Receiver Usage report. This is a built-in report that is available at the click of a button, which can also be scheduled for automated delivery based on custom periodicity. This report is also customizable, which allows you to select which XenApp server(s) or XenDesktop VMs you want to see the Receiver versions associated with it. 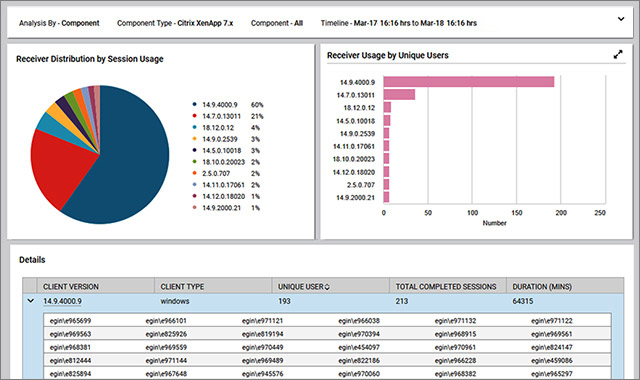 At-a-glance, this report reveals the different versions/types of Citrix Receivers that are used by end-users across the Citrix Site. This way, you can rapidly identify those client devices that are using a no-longer-supported version of the Receiver or a version where a few critical features are not supported. If a user complains of issues when accessing their applications/desktops, you can quickly drill down from a problematic Receiver in this report to check whether that user is using such a Receiver. If so, you can then urge the user to upgrade the Receiver on his/her device to resolve the issue.

By providing Citrix administrators with client-side insights that they have never had before, the Citrix Receiver Usage report in eG Enterprise helps them rapidly identify, investigate, and resolve issues on the Receiver end that could be adversely impacting the application/desktop experience of Citrix users.

Get a Live Demo of eG Enterprise »