Java Synchronization Issues
and How to Solve Them

What is Synchronization in Java?

Java applications deployed in production must be multi-threaded to ensure scalability (i.e., that they can handle a large number of requests in parallel). Java threads are used for process requests in parallel. Depending on the tasks that each thread executes, it is often necessary to synchronize between different threads. Synchronization is the capability to control the access of multiple Java threads to a common resource or object. For example, in an eCommerce application, different Java threads may be used to fulfil different orders, but to get an accurate count of the number of orders processed, synchronization is necessary when incrementing the count of orders processed.  Without synchronization, different threads could be updating a common variable in parallel and this could lead in errors when reporting the total numbers of orders. In this example, synchronization coordinates accesses across multiple Java threads as they write to a common location (e.g., a memory variable where the count of orders is maintained).

Troubleshoot the Top 10 Java Performance Problems in Minutes. Learn how »

You can also synchronize between web requests by having Java servlets that implement a single threaded model. In this case, requests to the servlet will wait while the executing request is being processed.

In the above cases, the developer has explicitly chosen to synchronize between the executions of different threads. Many a time, you may even be using synchronization without explicitly knowing. Access to Java collection classes such as Vector and Hashtable are synchronized, even though you may not explicitly be accessing them from within synchronized blocks. 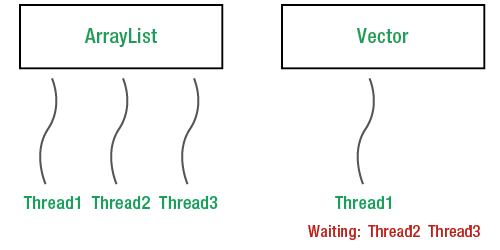 Many Java developers and programmers use synchronization constructs without thinking about their performance implications. There are two types of overheads associated with synchronization:

When your Java application is slow, how do you know whether it is thread synchronization that is the cause of slowness? Many things can go wrong with multi-threaded Java applications and reproducing issues can be a nightmare. Debugging and troubleshooting can take hours and even days or weeks.

To monitor thread synchronization activities of Java applications, it is essential to monitor thread activity inside the JVM. Java Management Instrumentation (JMX) provides ways for monitoring tools to collect and report on thread activity. There are built-in tools like JConsole and JVisualVM that allow you to look at what threads exist in the JVM, their current state and what line of code they are executing. However, these tools are only appropriate to look at the JVM in real-time.

Historical analysis of thread activity is extremely important. You may encounter a situation where the Java application suddenly hung at midnight and your helpdesk staff may have restarted the application to bring it back up. Without historical insights, you will have no clue as to what caused the problem: was the JVM short on memory? Was garbage collection taking time? Was there a thread blocking issue? Could it be caused by a database bottleneck? Having the ability to look back in time, to see what happened in the JVM when the problem occurred is a key to effective diagnostics. This historical data can also be shared by operations with developers, so problems can be quickly identified and resolved.

Historical analysis of JVM thread activity provides interesting insights. One of the key metrics to look at is the number of blocked threads in the JVM. A blocked thread is one that is waiting on a synchronized block or method for another thread to complete its execution of the same block or method.

Except in rare situations, a large number of blocked threads should not be a common occurrence. The operations team will want to be alerted to situations when thread blocking is high. For quick diagnosis, it is important to be able to see which threads are blocked, at which method/line of code, and which other thread is blocking this thread. Having this information both in real-time and historically is a key to quickly diagnosing Java performance bottlenecks.

While thread blocking is a problem, deadlocks are an even bigger problem. When a deadlock occurs, the Java application may hang completely and become unresponsive.

Deadlocks occur because of poor coding – one thread usually acquires a lock and then it waits on a second thread which has acquired a lock and is waiting on the first thread to finish. As with blocked threads, during deadlock situations, it is important to know the names of the threads that are deadlocked and which line of Java code each of these threads is executing.

Here are some best practices that you should take into account if you want to design a high-performance Java application:

Best Practice #1: Concurrency is tricky, so keep it to a minimum

Best Practice #2: Pick wisely after having done your research

Best Practice #3: Perform an audit and upgrade your APIs where necessary