What is a Thread in Java?

A thread in Java is the path followed when executing a program. All Java programs have at least one thread, known as the main thread, which is created by the Java Virtual Machine (JVM) at the program’s start, when the main() method is invoked.

In Java, creating a thread is accomplished by implementing an interface and extending a class. Every thread in Java is created and controlled by the java.lang.Thread class.

A single-threaded application has only one Java thread and can handle only one task at a time. To handle multiple tasks in parallel, multi-threading is used: multiple Java threads are created, each performing a different task.

Java Thread vs. Java Process: What is the Difference?

Figure 1: Multiple threads of a Java program
have their own stack but share the heap memory
of the JVM.

A question that often comes up is how is a Java thread different from a Java process.

Why are Multiple Threads used in Java Applications?

Most commercial Java applications use multi-threading extensively. This is done for several reasons, explained in the multi-thread examples below: 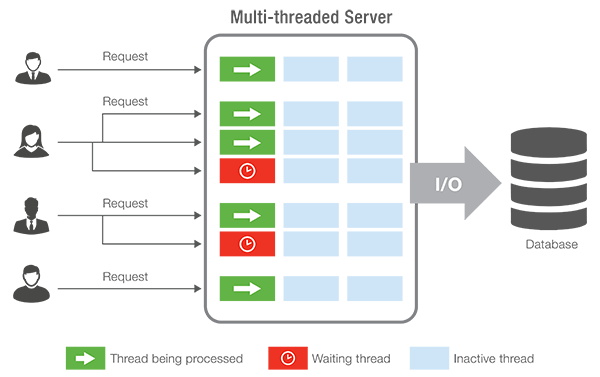 Why Should You Monitor Java Threads?

Java applications in production can have hundreds or thousands of Java threads running in parallel. When an issue is detected – e.g., the JVM is taking up very high CPU resources – an obvious question is which Java thread is causing the CPU spike? And an immediate next question is which code snippet is the Java thread executing?

While it is important to report this information in real-time, it is also important that these details are made available for historical analysis. For instance, your application could have had a CPU spike at 2 am and become unresponsive, forcing your operations team to restart the server. While this would have solved the problem temporarily, what was the cause (which thread, or method or line of code) and how do we prevent this issue from re-occurring?

Having the details of what threads in the JVM were running at 2 am and which Java thread was taking up CPU is a key to being able to diagnose the application performance issue.

The screenshots below show how eG Enterprise captures the historical data of metrics like high CPU usage in Java applications so you can see trends over time, and also dive into the JVM stack trace for further analysis.

Figure 3: Screenshot from eG Enterprise showing a spike in CPU in the JVM caused by a thread

Figure 4: Screenshot from eG Enterprise showing how a user can look at the JVM stack trace to isolate the thread causing high CPU usage

While synchronization ensures consistency of the common resource (in this case, the configuration file), it also introduces the possibility of delays in processing requests. Requests being processed by an application server must wait until the corresponding thread is allowed to enter the synchronized block. Excessive use of synchronized blocks can result in a high percentage of the processing time of a request being spent waiting for access to synchronized blocks of code.

To ensure a great user experience for your Java application, it is important to ensure that blocking due to thread synchronization is kept to a minimum.

At the same time, it is also important to track the number of threads being spawned in the JVM. If too many threads are created in parallel, the JVM memory must be sufficiently sized to handle this load. If not, application performance will suffer.

Administrators must also track cases of thread leaks – i.e., instances when the number of threads in the JVM keep on increasing and ultimately cause the JVM to crash.

JVM Sizing Tip: If too many threads are created in parallel, the #JVM memory must be sufficiently sized to handle this load. If not, application performance will suffer.
#Java

Application servers have Java thread pools where threads are created and remain in a waiting state for new user requests. The thread pools have maximum limits on the number of threads in each pool. If this limit on the maximum number of threads that can be executed in a pool is reached, new requests to the application server will be rejected, which is why it is important to monitor the number of current threads in each pool.

Figure 5: Example to help you understand the various states of a Java thread

by Arun Aravamudhan
Discover, Diagnose, and Resolve IT Performance
Issues with Full Stack Observability
Get Started